It was a short 18 hours (Tues. Aug 9th 7pm- Wed. Aug 10th @ 1pm)  from being told "you have cancer" to having everything (scans, tests, port surgery, and chemo) planned and scheduled.

Wednesday August 17th I had my first chemotherapy treatment.

I'm not sure what I was expecting, but from the limited knowledge I had, I might have thought it was going to be like acid going into my vein and I'd immediately feel like vomiting..... Luckily, it was not like that at all. 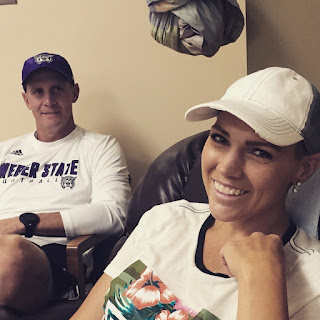 I was given some gifts based off research sweet friends and family had done specifically for the chemo treatment.  They included socks and a blanket because you get cold (I did get cold)  A neck pillow because you get tired (so tired you slurrrr your speech and have to just stop talking) Magazines and puzzle books because it takes a couple hours (or 5...FIVE long hours, of course I slept through some of those. lol)  A water bottle (I drank a LOT of water that called for 2 bathroom breaks)  A bag of candy because your mouth tastes like metal (I did not use this day of chemo but days into it I constantly have a nasty taste in my mouth so gum or mints are a constant)  Mouth rinse for mouth sores (which thankfully have not appeared yet) and the best gift was the bell Alayna bought me so all I have to do is ring it and my servan.... errr I mean children come running ;)  Can't wait to get that thing broken in. 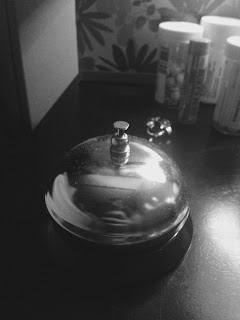 I came home surprised I felt as well as I did. I spent about an hour sending my sister back home then packing Jacob and Allie to go stay with Jay's sister.  After the hour, it hit and I was starting to feel the nausea and exhaustion. Jay would be at work until 9, Ashtyn had drill until 9, I can't remember where Alayna was? She might have been taking a nap? or was with a friend? Perfect time to lay down in a calm quiet house.  I woke around 7pm to a sweaty pillow and disabling nausea.  My initial reaction was crap, I imagined it to be bad but I'm not sure I am strong enough to do this bad? Laying there considering my options; crying (but that will make me move which will make the nausea worse and its not worth the tears for that) puking (again requires moving, all the way into the bathroom) puking from the bed (I could just roll over to the waste basket next to my bed but I haven't been able to roll onto either side without pain for months and with a freshly installed port on that side there's no way I could roll and make it into the bin.  And I definitely was not in the mood to clean up puke) The option with the least amount of movement was to text Emily and Josie to see if the second anti-nausea prescription had been picked up and if it had been long enough that I could start stacking the 2 meds. By the time I received the negative texts; prescription had not been picked up and I still had to wait before taking anything, the sweating had stopped.  I realized it had been since 11:30 that I had eaten.  Slowly, very slowly I sat up, put my feet down and with my intentions set on toast, I made my way to the kitchen.   Once I ate, the nausea backed off to mid grade and doable.  I felt like crap but totally confident it was doable.

The following two days were waves of good and bad.  The bad was never kicked up to that initial extreme nausea with sweats and death wishes ;)  although the next morning I had the shakes. The good was mostly a simmering of nausea and fatigue but still able to get up and around.  Both Thursday and Friday I went up to Jay's office for a visit. It was good to get out of the house.

Before I was diagnosed, Jacob and I had talked about redoing his room as part of his birthday since a few months back he told me he would like to sell his bed and get a new one.  The poor kid had been sleeping on the floor on a mattress.  When he went to stay with Jay's sister I got it in my head I wanted to surprise him with a freshly painted room.  Knowing there would be no way I could do it myself, I audaciously asked my friend to come "help" me paint on Saturday.  There wasn't a pause or hesitation, just sure I'm there.

I can't say enough about how much help, love, support, care and concern our family has received!

The most beautiful way it has been put was by Big Sky Media Relations, Jon Oglesby Who wrote the following when sharing Cournteny'svideo on facebook;


Everyone in life goes through tough things, but it's the people around us that get us through life! Take the opportunity tonight to thank God for your support network, tomorrow join someone else's support network, and every day be #SaraStrong 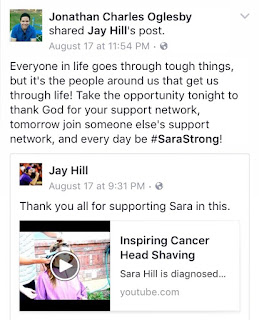 I think about this statement often and I thank my Father in Heaven for my beautiful support group and desperately hope I will always take every opportunity to be someone's support network as so many have been a part of mine.


Suzanne came and painted while I left to catch the end of the last camp scrimmage. When I returned she was painting. I pushed the roller around a few times then laid on the bed while she kept painting.

There are tears of joy and love when I think of the sacrifice she made the last Saturday of the summer away from her family in the service of mine.

Sunday I could tell I had pushed it too hard.  I had been so excited for Saturday's project I woke up early to prep the room and stayed up a little too late.  I was past exhaustion and hurt so bad. The pain in my chest was increasing and the meds that were helping were not anymore.

I went to church wearing one of the wigs and I did not have it adjusted properly.  It was squeezing my brain and bulging my eyes so bad I nearly pulled it off mid sacrament meeting and had we not been sitting on the second row I probably would have. That was the only hour I could do and quickly came home and went to sleep.

Monday and Tuesday the waves of good were longer but still in a lot of pain throughout my chest, neck arms and back. It was hard to sleep but found a little relief sleeping propped up with four pillows.

Monday night Jay took the team camping near Causey Reservoir.  I have been so excited about this since they planned it at the beginning of summer. I hope to post just about this soon.

Wednesday was the worst day of all.  Extremely nauseated the entire day.  The don't. touch. me. kind.  It slowed me way down and I think if you asked those around me, they might have said I was kind of grumpy??

The good thing, Thursday came and with a new day I felt MUCH better.  Friday, again a good day that included a birthday lunch with friends.

Saturday (Mah Burfday) I woke up 7am met Emily downtown where they were offering yoga in the park. I was so happy, I could do it all. I fell over once, got light headed and dizzy a few times and my breath was at least 2:1 but I felt like I got a good workout and it made me excited to try more this coming week.  After yoga I grabbed a few kids, the dog to get groomed and did a little grocery shopping.  We got Alayna off to her soccer game in Logan and then went to Jacob's game.  It felt like a typical normal Saturday.  Including Jacob not listening a bazillion times and wore the wrong jersey.  Of course, it worked out fine like it always does.  We picked Millie up from the groomers on the way home from the game and to our surprise Dad was home! It was about 4pm, that is a record for my birthday!  Never during fall camp is he home that early!! We both took a short nap then headed out to Farmington Station for dinner and hat shopping.  Jay said it caught him off guard I was not as into the wigs as he thought I would be.  I think I will get into them more but for now hats are my go to.  He has always said he likes when I wear a ball cap.


The birthday hats, I love them all! 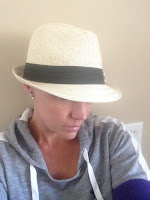 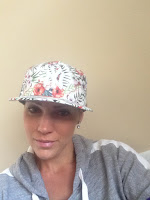 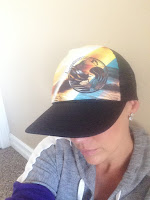 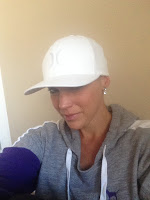 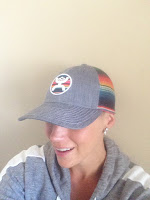 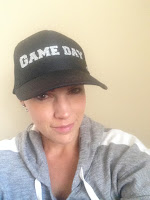 We came home to an almost surprise party with our good friends from Murray.  Emily accidentally text the plans to me instead of the friends ;) We  played cards and pool late into the night.  It was one of the best birthdays, surrounded by family and friends, doing normal things that may have been taken for granted. Jay being home early and a beautiful warm summer evening was the cherry on top.

Did you know that you can create short urls with Shortest and get dollars from every click on your short links.

SKH
We love supporting our Dad as he tackles the job of Head Football Coach at Weber State University. Ashtyn(16) Alayna(12) Jacob(9) Allie (5) are so much fun and I love watching them laugh and grow. This is a place where I love to log thoughts, memories and feelings. I love hearing from friends and family. Keep those blog posts and comments coming. You can email me too! sarakhill55(at)gmail(dot)com

Do not trust your memory, it is a net full of holes; the most beautiful prizes slip through it. --George Duhamel

The key to having it all is believing that you already do.