**warning: Jay pride ahead**
read only if you too have Jay pride ;)

BUT on the first Wednesday of February, for a moment, all the coaches hard work is on display.


I believe Jay is one of the best recruiter out.

He has a "type" for each position on the field and his accuracy has been proven to me over and over.  He looks at everything from body type(some positions it really makes a difference if they have skinny calf and ankles), size, ability to grow (he is usually right when he sees a kid that looks like he will still grow or has done all his growing and if a frame can put the needed weight on or off), talent (raw or polished), athleticism and personality.  He is a good unbiased judge of character.

And then he walks into the recruit's home with the information the kid need.  He has done his homework and has a plan for them educationally.  Knowing the exact gpa and test scores they need. Many times getting the kid graduated a semester early and getting them to the university and working out with the team before graduation. Which blows the parents away who tell hime not one other recruiter has given them that information.

He makes sure to have a great relationship with the coach knowing which coaches exaggerate and by how much.  If a coach says I have a kid that is 6'2" and run a 4.4 Jay knows the kid is probably 5'10 and a 1/2 and runs a 4.7 because of the relationship and the consistency in his recruiting.

He now is prepping his coaches to be just as effective having specific recruiting teaching meetings where he shows them how to watch the film of a recruit.  More than the highlights, do they get up quickly after a play, do they run off the field or walk.  Film shows more than just the big plays and big hits.  Just the other day He told a coach, measure the kid shoes off, mark the wall, in front of the coach so he knows the right way to tell us size.

The coaches go to the recruits until weekends in December and January, that is usually when the recruits come on an "official" visit and come to the school. This is a 48 hour period when the school can pay for the kid to fly or drive to the school, pay for their hotel, meals and entertainment while visiting.  The kids get to see the facilities and the campus.  Check out their school of interest, be it business, engineering, education, medical or whatever their fancy.  They get to see the dorms and where they can eat if they are awarded a meal card.  They also meet current players who's job is to host them and answer questions they might have.


Here at Weber State some of the entertainment or activities are tubing and surfing.  This obviously is to provide fun and entertainment.

But it also gives Jay an opportunity to see the recruits toughness, ability to overcome fears (surprising how many kids are afraid of water, snow, cold, new unfamiliar things) 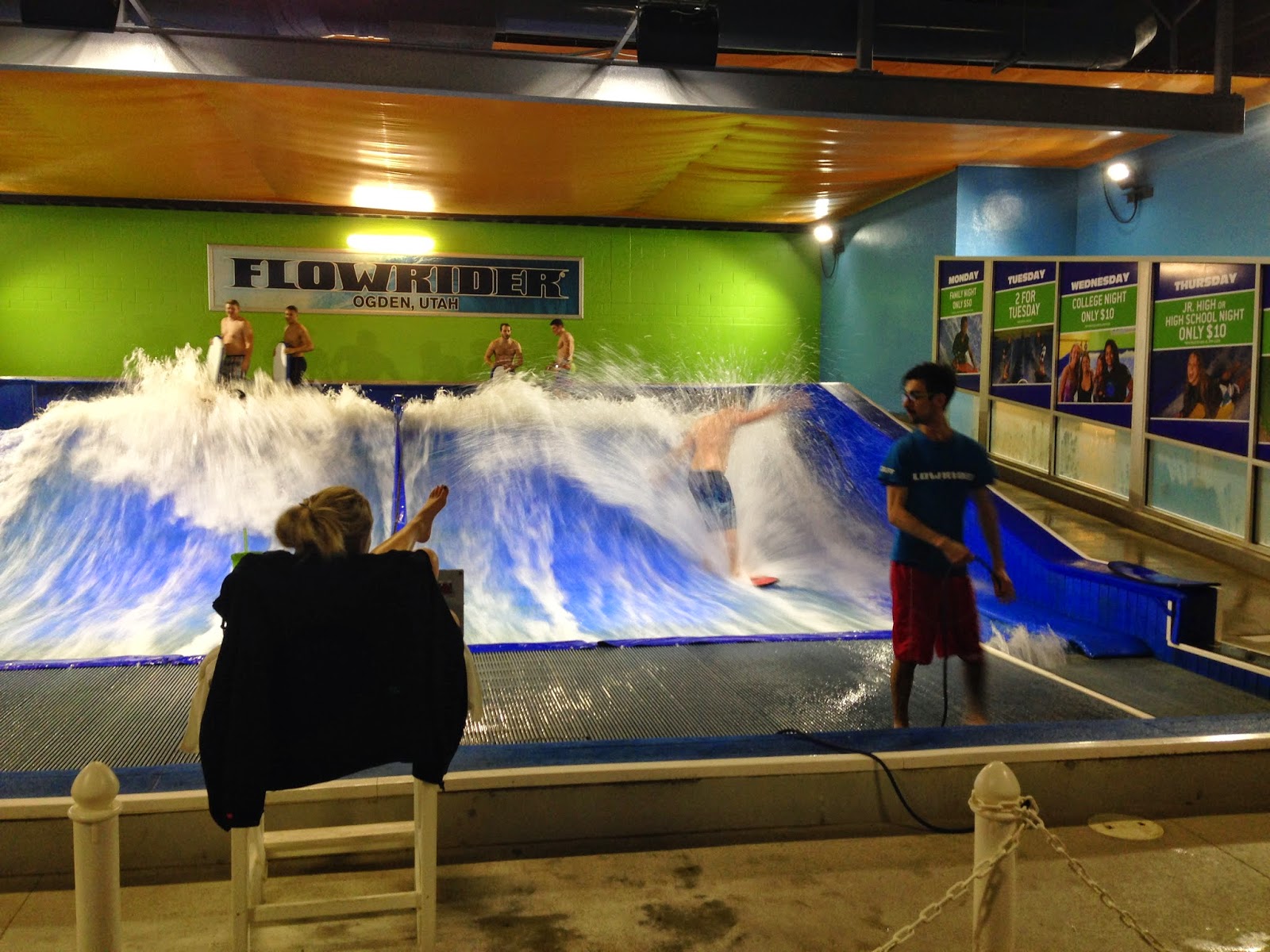 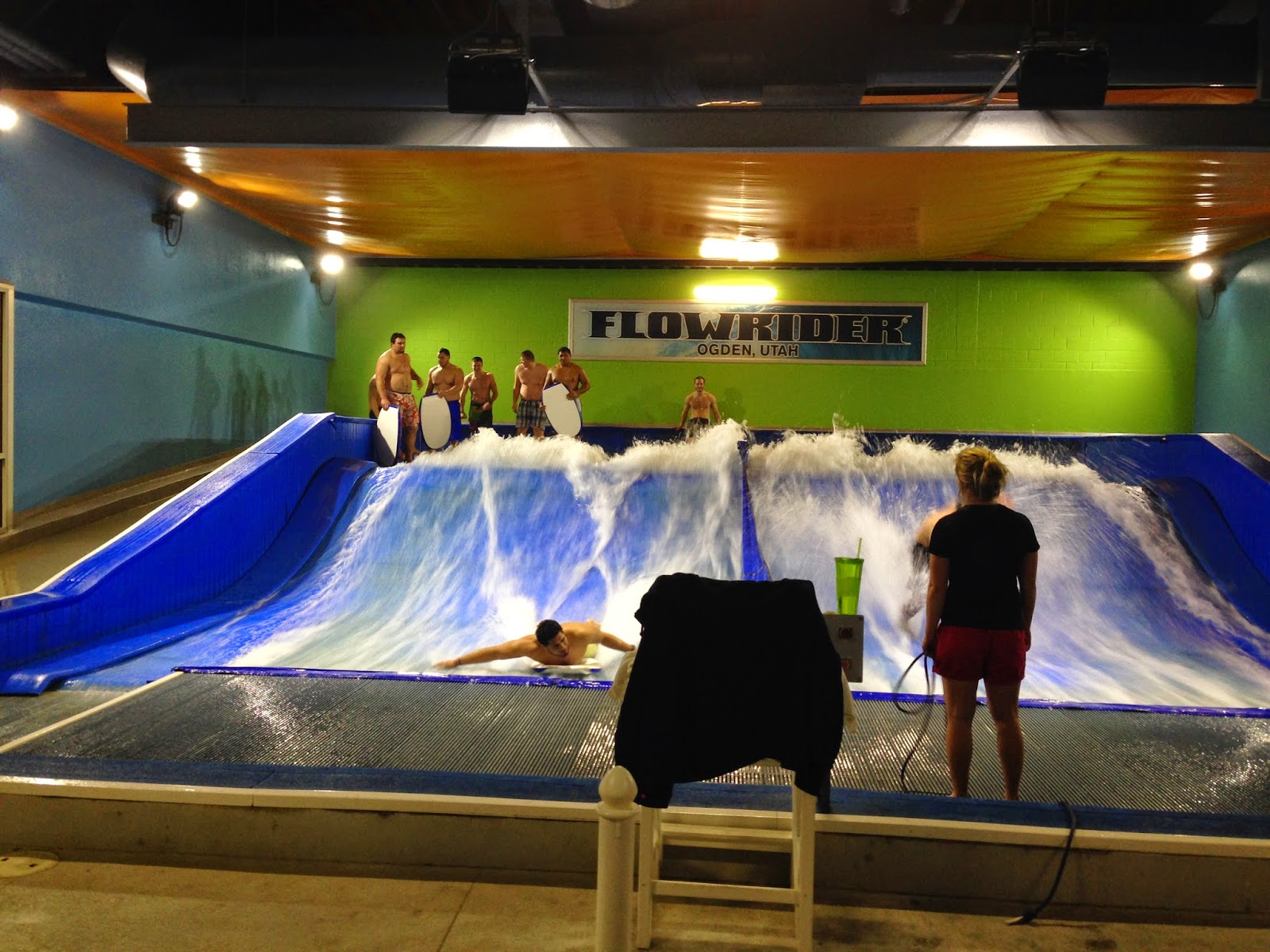 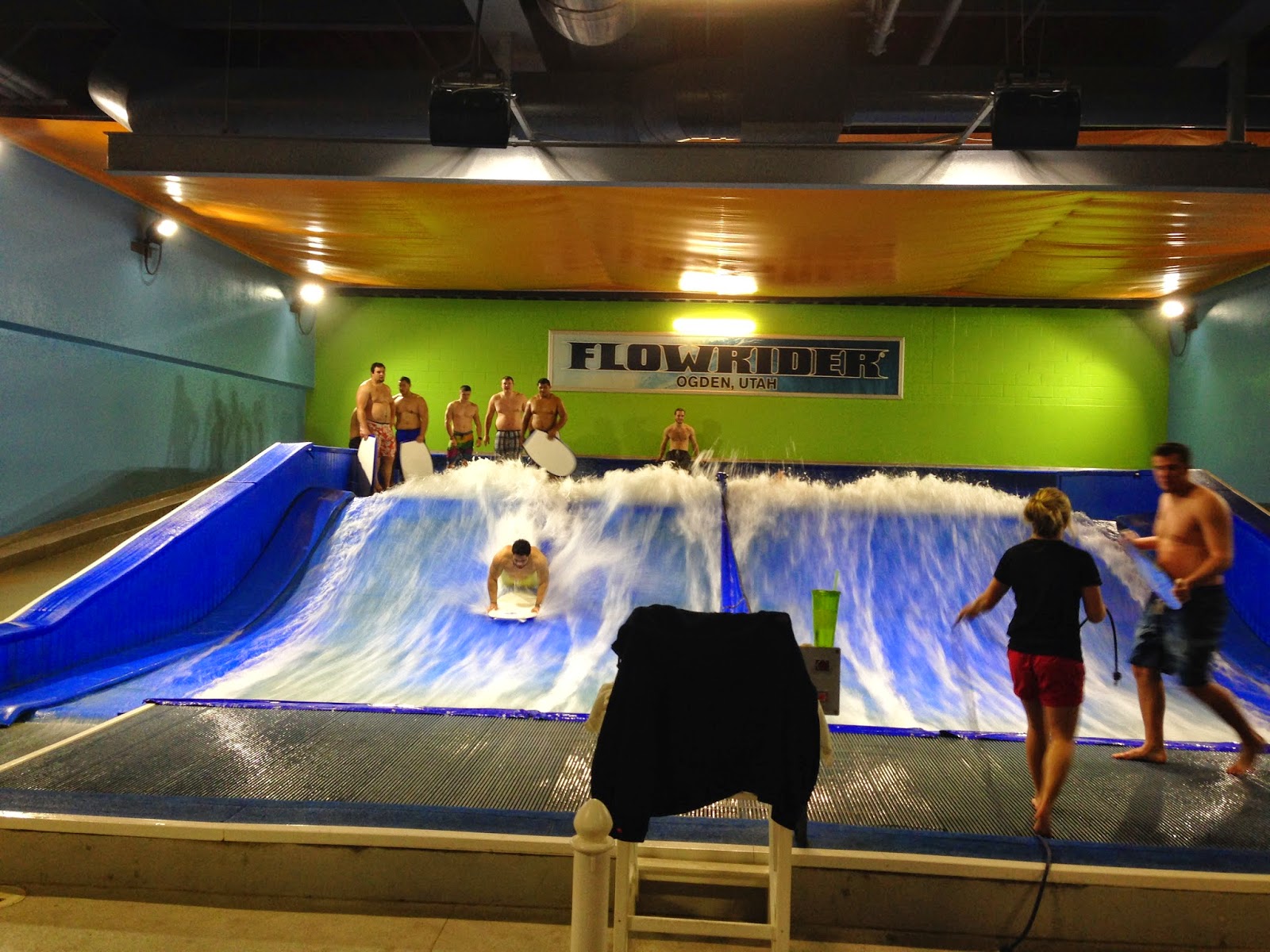 And it is very entertaining for the spectators :)

Here is a room full of recruits, their parents, players, coaches and a few wives. 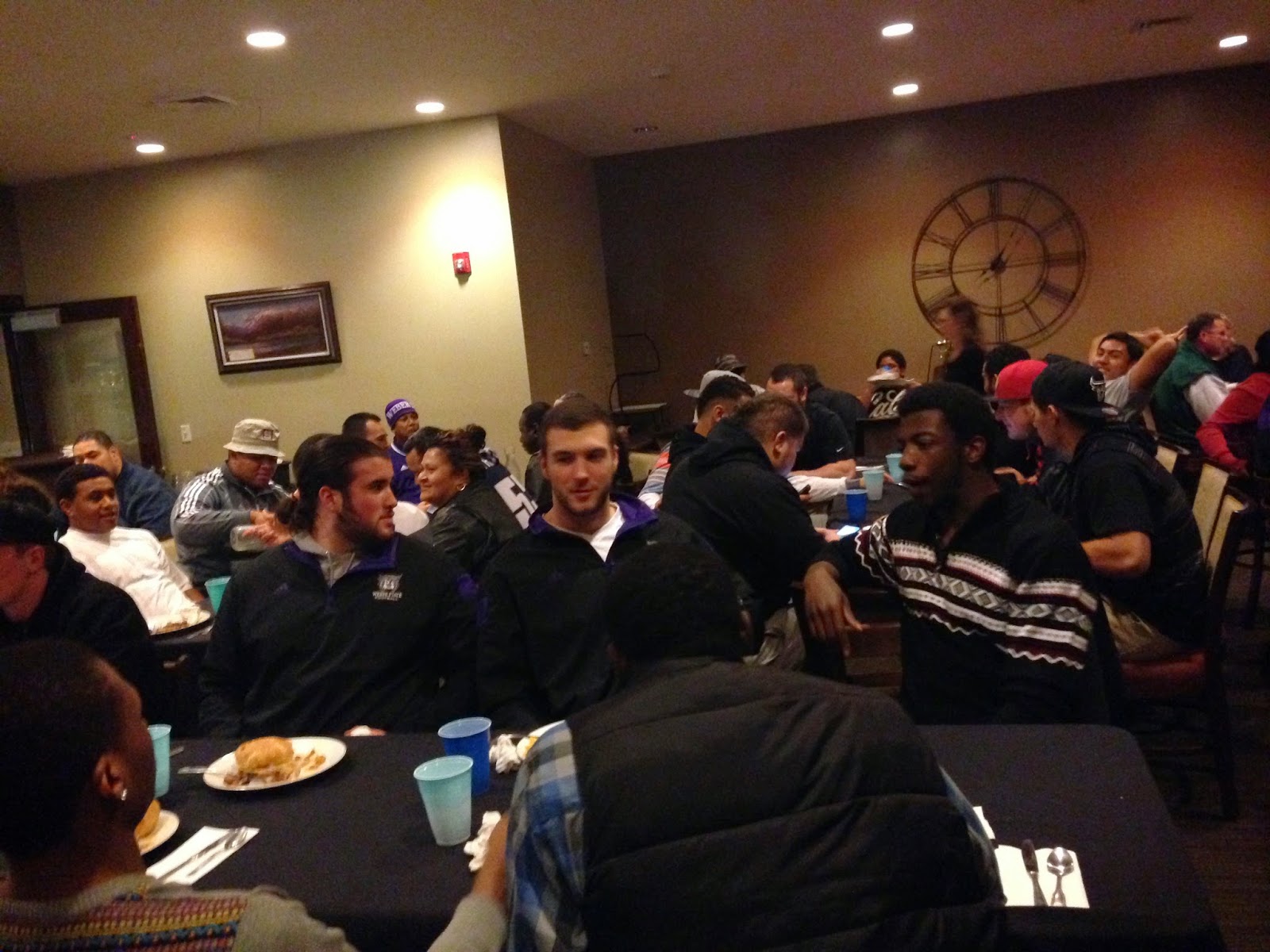 This was just before one of the recruits stood up, hushed the room and announced his commitment to Weber State.  There is such electricity and excitement that surrounds a kid who valiantly pledges to a school.  It's not often it is announced like this but I have heard it many times as I am near Jays phone when a recruit calls to commit.  I love it!

Jay is often stopped to meet or visit with fans. 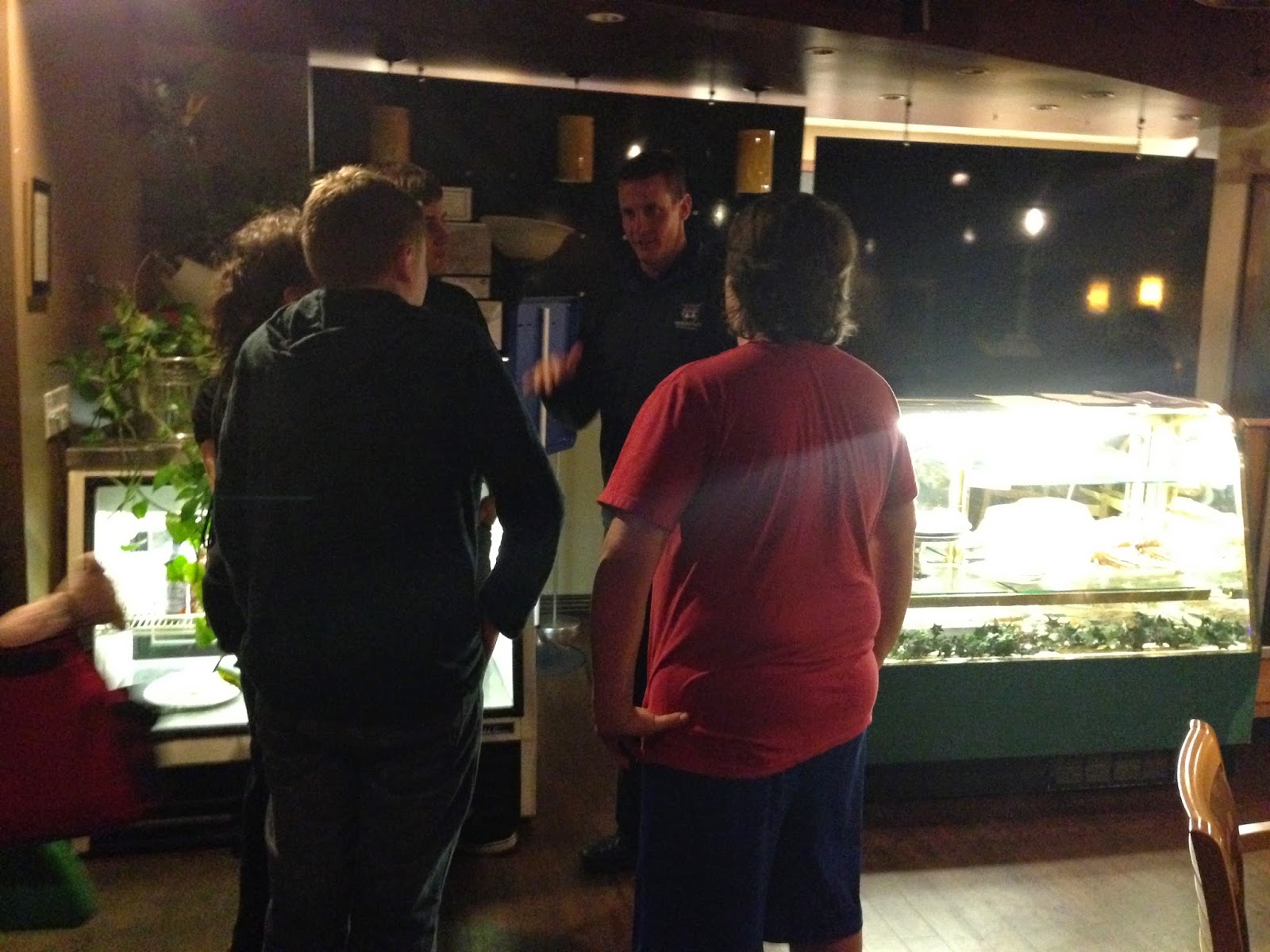 I imagine that at sometimes my "Jay Pride" gets annoying but he is just so good at what he does.  I absolutely love watching him.  He has always requested I come to the dinners with the recruits to talk to the parents.  Many times all I was able to get in was a "hello how are you" and was super shy to talk to them.  Felt like I was just there adding to the restaurants total bill.  Until I stepped out of my shell and had a fantastic conversation with the parents.  Their son committed the next day and I dubbed myself the closer.  And with that mindset I have closed many deals....(LOL) Not really BUT the symphony of coaches, their wives, the players who host, the athletic department and support staff who all give endless time, energy and love to be in those saturday fights to win 12 games.

SKH
We love supporting our Dad as he tackles the job of Head Football Coach at Weber State University. Ashtyn(16) Alayna(12) Jacob(9) Allie (5) are so much fun and I love watching them laugh and grow. This is a place where I love to log thoughts, memories and feelings. I love hearing from friends and family. Keep those blog posts and comments coming. You can email me too! sarakhill55(at)gmail(dot)com

Do not trust your memory, it is a net full of holes; the most beautiful prizes slip through it. --George Duhamel

The key to having it all is believing that you already do.